Hello my amigurumi friends.
Today I am sharing one more new and pleasing pattern with you.
You can safely knit. Don’t forget, stay tuned for new designs! We love you.

• Stitch marker (optional, I use yarn)

• Black and red thread for the eyes and mouth

You can use any kind of yarn for the hair, like mohair, boucle or wool.

Paloma is approximately 22 cm / 8.5 inches tall. Exact gauge is not necessary for this project. Her measurements will change depending on the hook and yarn you use. It’s important to crochet tight, to avoid the stuffing showing up after filling.

The pattern is written in US American crochet terms. You will use these stitches:

BLO = back loops only

A method of decreasing. Insert hook into the front loop of the next two stitches and pull a loop up through both. Yarn over and pull through last two loops left on the hook.

Paloma and her hat are worked in continuous rounds unless otherwise instructed.

Fasten off and leave a long tail for sewing. Use the yarn and a needle to close up the hole by stitching back and forth across the opening. Weave yarn into the head.

Do not stuff the arms.

With the pink yarn join with a sc into one of the legs:

With two pins mark the starting and finishing places of the frill on the last front loops round of the swim suit. It should be in the middle of the doll 7 stitches apart as shown in the pictures. Turn the doll upside down and join with a sl st : Ch 2, 3 dc into the same st, 3 dc into each of the following 6 sts. Ch 2 and join into the same st. Fasten off and weave the end into the doll.

Place the arms onto the body and sew them onto their places.

Place the head onto the body, secure it with a few pins and with small stitches sew it carefully onto its place. You may add some extra filling while you’re sewing it.

Grab a book or something about 16-17 cm / 6-7 inches wide and roll your yarn over several times. Cut one side of the yarn and place them next to each other. You can use any kind of yarn for the hair, but to achieve a more girly look I would recommend boucle or thicker wool yarn. Place the yarns evenly onto the head between two pins. Her pigtail will be on the left side of the head so leave the yarns longer on the right side. The pins are on the right side of the head in line. The first pin should be on her forehead and the second pin in the middle of the back of her head. You will sew the hair onto the head between the pins with a matching thread to the hair. Place a scrunchie around the yarns to make it easier to sew. Now make a pretty pigtail on her left side and cut the uneven ends. You may fix the hair on the sides with a few stitches.

Fasten off and weave the end.

Do not work continuously, join with sl st at the end of each rows. Start with jute.

With the help of a fork, make a tassel with orange yarn. Place it onto the bag and tie it

You are ready with Paloma. I hope you enjoyed making her as much as I enjoyed making this pattern. Don’t forget, if you have any questions or need clarifications on any of the instructions, I’m here to help you! 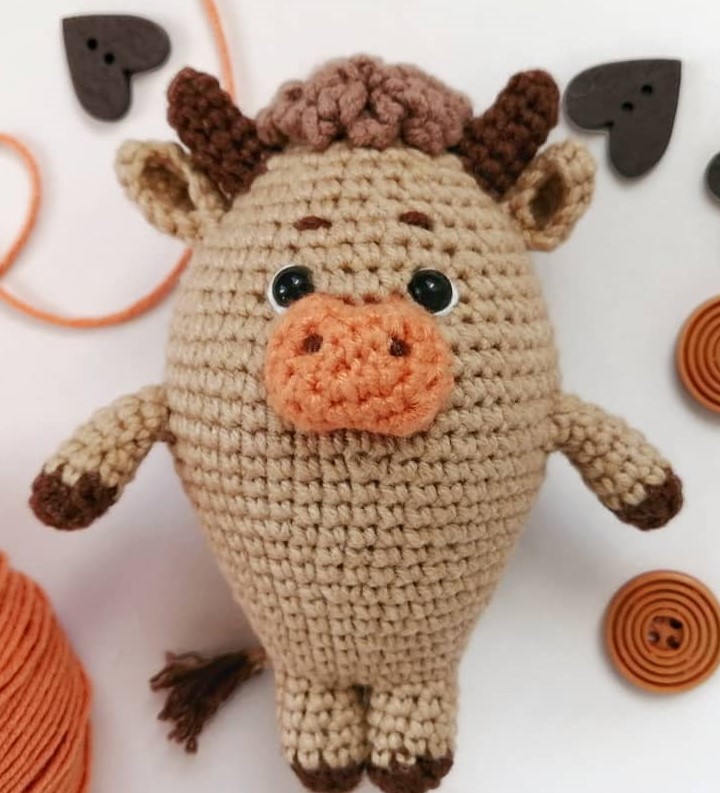